I’ve got a good one coming up. I am going to be flown out to a French carp water that has just been bought by a friend of mine. What he wants to do is run this very beautiful carp fishery in more traditional ways. He doesn’t really want the ‘oi,oi’ brigade out there and he doesn’t really want to make it a boilies only type of venue.

There are some big fish in. I’m told the lake record is very close to seventy pounds and a sixty-seven pounder was caught only just a few days ago. What my friend wants is for me to visit with the new centrepin and try to capture at least one fish of over fifty pounds on it. 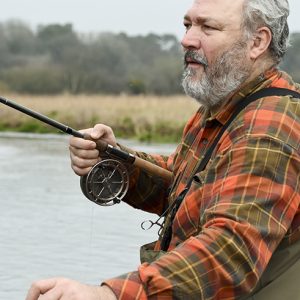 I have no qualms about this at all. After all, on pins in the past, I have caught carp to nearly forty pounds here in the UK and I can’t think an extra ten pounds or so is going to lay my plans to waste. I guess that I will marry the centrepin with twelve pound line and probably the old twelve foot Hardy Avon rod which is strong enough, easily, for the task.

Once again, it’s all about balance. I’ll be amazed if that gear can’t land anything that swims in a French carp lake – I’m not talking about a three hundred pound catfish, of course.

However, the proof will be in the catching and, of course, you will read about the results as soon as they happen. Or not!